Falna is a town in Pali District in Indian state of Rajasthan. It is an important railway station on Ahmedabad-Jaipur railway line. Falna is 75 km from the district headquarters of Pali. Falnais the nearest railhead to famous Ranakpur temples. The temples are 35 km from Falna. In Falna itself the Jain Golden Temple is a visitor attraction.We provide Best Taxi Service & Tour Packages in Udaipur for affordable price.

Ranakpur is a village located in Desuri tehsil near Sadri town in the Pali district of Rajasthan in western India. It is located between Jodhpur and Udaipur. It is 162 Km from Jodhpur and 91 km from Udaipur, in a valley on the western side of the Aravalli Range. The Nearest Railway Station to reach Ranakpur is Falna Railway station. Ranakpur is one among the most famous places to visit in Pali, Rajasthan. Ranakpur is easily accessed by road from Udaipur.The construction is well documented in a 1437 CE copper-plate record, inscriptions in the temple and a Sanskrit text Soma-Saubhagya Kavya inspired by a dream of a celestial vehicle, Dhanna Shah, a Porwal, commenced its construction, under the patronage of Rana Kumbha, then ruler of Mewar. The architect who oversaw the project was named Deepaka. There is an inscription on a pillar near the main shrine stating that in 1439 Deepaka, an architect constructed the temple at the direction of Dharanka, a devoted Jain. When the ground floor was completed, Acharya Soma Sundar Suri of Tapa Gachha supervised the ceremonies, which are described in Soma-Saubhagya Kavya. The construction continued until 1458AD..

Falna is a town in Pali District in Indian state of Rajasthan. It is an important railway station on Ahmedabad-Jaipur railway line. Falna is 75 km from the district headquarters of Pali.Falna is the nearest railhead to famous Ranakpur temples. The temples are 35 km from Falna. In Falna itself the Jain Golden Temple is a visitor attraction.Falna Jain golden temple is a temple built at Falna near the famous Jain temple Ranakpur. It is a major attraction for Pilgrims. The temple belongs to Shri Shankeshwar Parshwanath Bhagwan. “Kanch ka Mandir” (Mirror temple) located below the main temple is also a place of worship, where the walls are covered with small sizes of mirrors. Though it is small, but it is worth to visit.

The Society has its head office in village Jadan district Pali, Rajasthan. Since 1993 the Society has been active in the areas of Health, Education, promotion of Yoga and Vedic culture, Rainwater Harvesting, and development of peace and understanding across cultures and religions. The central building of this large complex, is constructed in the shape of the ancient Sanskrit symbol OM. The sound of OM consists of three letters: A, U and M. It represents the cosmic vibration, the original eternal sound. OM is the underlying source of creation, adi-anadi – the reality that was, is, and will forever be. Therefore OM represents wholeness, completion. It is the most beautiful mantra, which contains all three fundamental aspects of God – Brahma (the Creator), Vishnu (the Sustainer) and Shiva (the Liberator).

Auwa is situated 12 km to the south of headquarter of Marwar Jn. tehsil. Previously Auwa estate was a part of Sojat district of Jodhpur State. The Place is insignificant today but it got great prominence during the upheaval of 1857 when its Jagridar Thakur Kushal Singh rose up and revolted against the British. Bagawat did by Soldiers of Army at Erinpura Chawani on 25th August 1857. These soldiers of army reached to village Auwa. Thakur Khushal Singh led them for freedom fight. In this movement Thakurs of Marwar State Ashop, Gular Alaniyawas, Bhimaliya, Redawas, Lambiya and Thakurs of Mewar State Roopnagar, Lasani, Salumber, Asind also helped to Auwa Thakur.

Somnath temple of pali is famous for its historical background and architecture. It is situated in the middle of Pali city. It was constructed by the king of Gujarat Kumarpal Solanki in the Vikram Samvat 1209. It is the temple of Lord Shiva. In the premises there are many small temples of Hindu deities.

Ghanerao is a village in Desuri tehsil and is situated in the south-west of Desuri on the road leading to Sadri. The place was held by a first class Jagirdar of the erstwhile Jodhpur state prior to the independence and it was the prime duty of this Jagirdar to defend the famous fort of Kumbhalgarh (now in Rajsamand district). There are many, both, Hindu and Jain temples in the village and its vicinity. There are about eleven Jain temples; some of them are quite old, in the village itself besides Hindu temples of Laxmi Narainji, Murlidharji and Charbhujaji. On the outskirt of the village is situated a Math known as Giriji ki Dhooni. A temple of Gajanand here is worth seeing. There is also a mosque here is worth seeing. There is also a mosque here. Another Jain temple, known as Muchhala Mahavir is also situated in the vicinity of the village. The temple is said to be very old and whose management is with the Anandji Kalyanji Trust.

There is no mention of the antiquity of this temple, but it is regarded to be very ancient. The last renovation was accomplished in the year 2022 Vikram era and the idol was installed. The king of Udaipur once came here on a pilgrimage. While he was going to make a mark of pigment on forehead (Tilak) he saw a moustache hair in the bowl of saffron and in fun he said to the worshipper in the temple, “It seems that God has moustaches”. And the worshiper who was devoted to God said, “Yes God can assume various forms as he wishes.” The obstinate king said, “I will stay here for three days. I want to see Mahavir with moustaches”. Gratified with the worship of the devoted worshiper, Mahavir with moustaches appeared to the king. Therefore, this idol came to be called Muchhala Mahavir. Even today many miraculous events happen here. A fair is held here every year in the month of Chaitra. This Tirth belongs to the group of the five Godvar Tirth. Falna, the nearest railway station is at a distance of 40 kilometers.

Kumbhalgarh fort ("Kumbhal fort") is a Mewar fortress on the westerly range of Aravalli Hills, in the Rajsamand district near Udaipur of Rajasthan state in western India. It is a World Heritage Site included in Hill Forts of Rajasthan. Built during the course of the 15th century by Rana Kumbha, Kumbhalgarh is also the birthplace of Maharana Pratap, the great king and warrior of Mewar. Occupied until the late 19th century, the fort is now open to the public and is spectacularly lit for a few minutes each evening. Kumbalgarh is situated 82 km northwest of Udaipur by road. It is the most important fort in Mewar after Chittaurgarh. 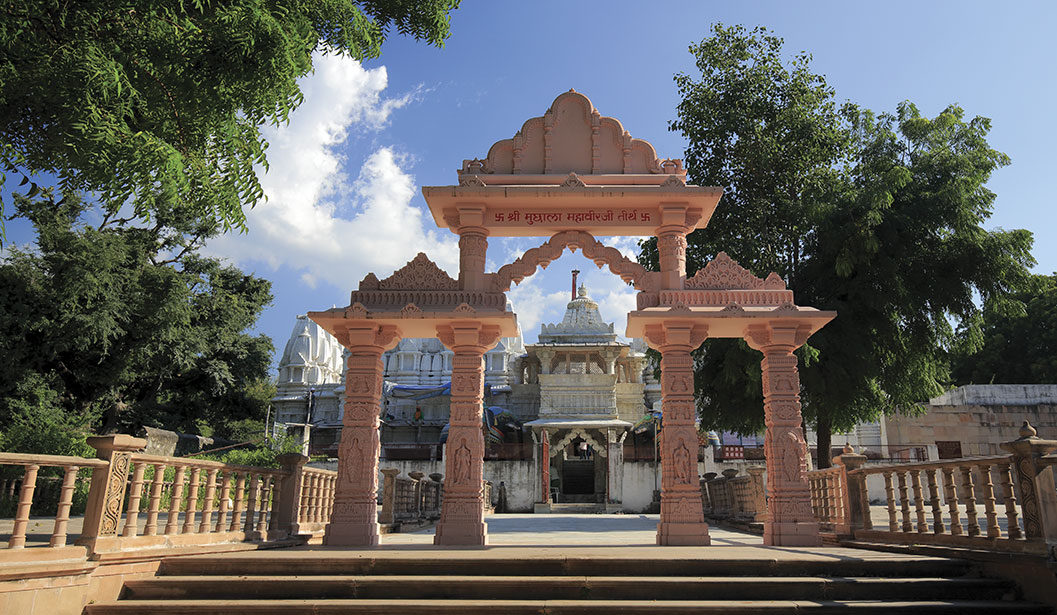 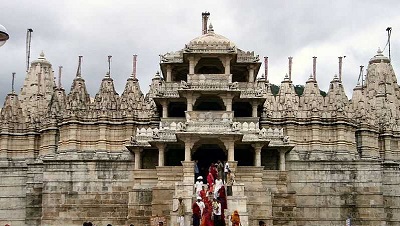 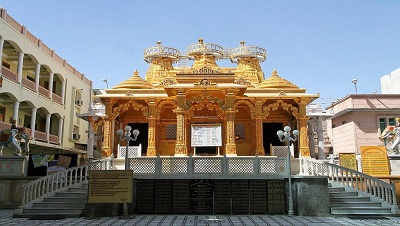 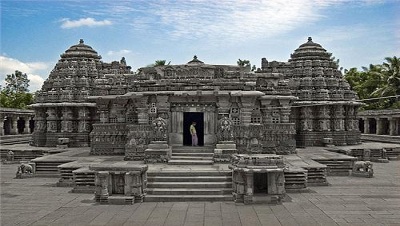 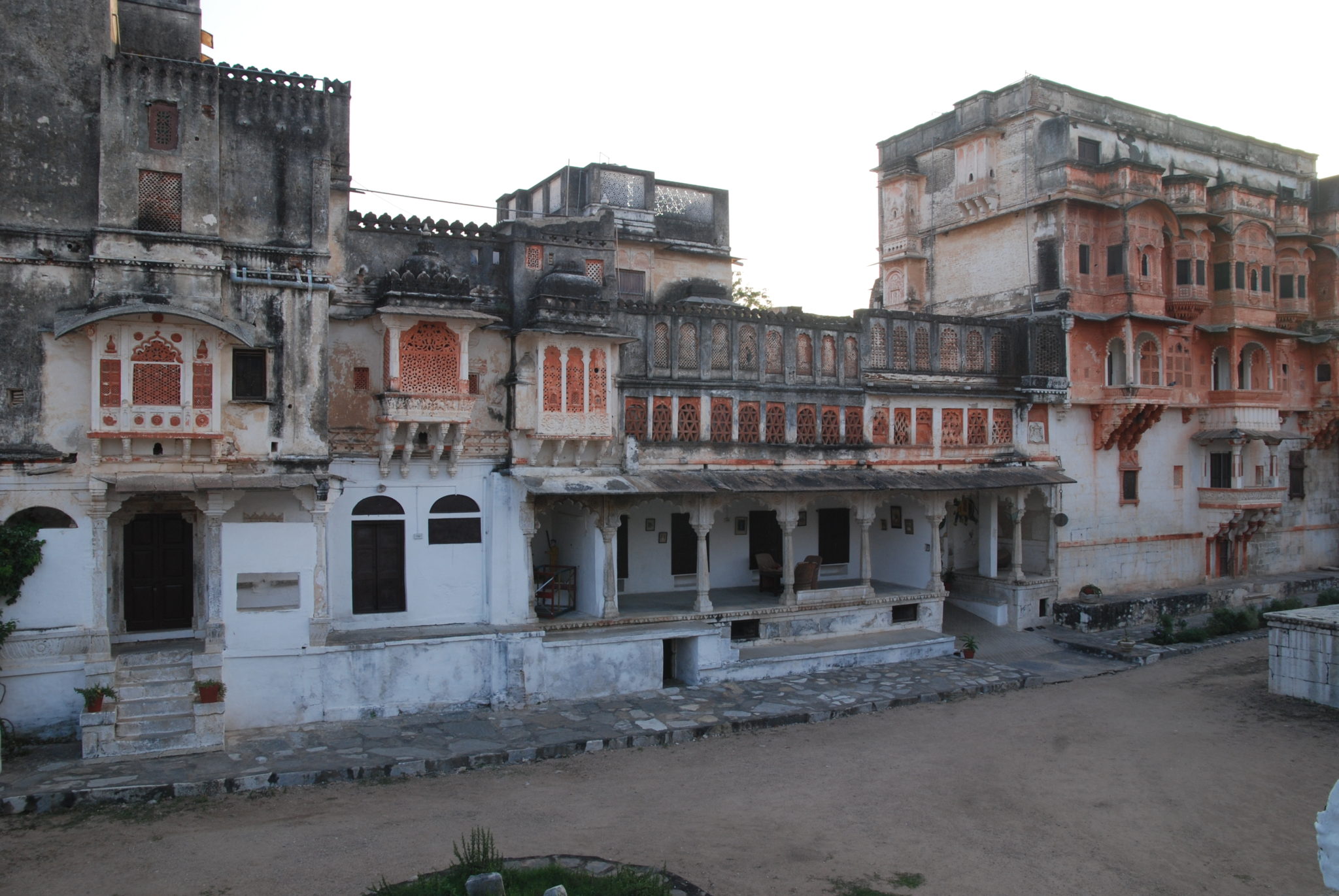 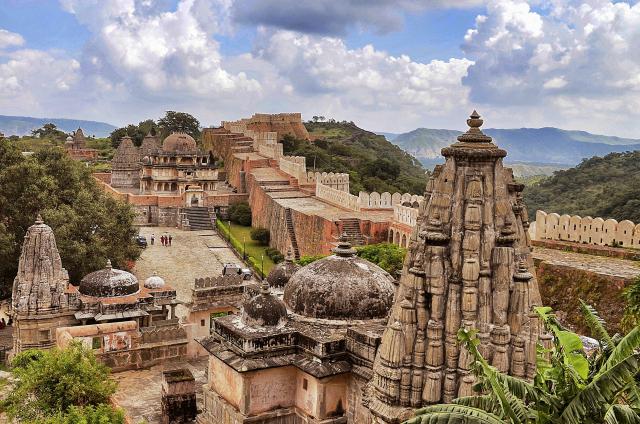 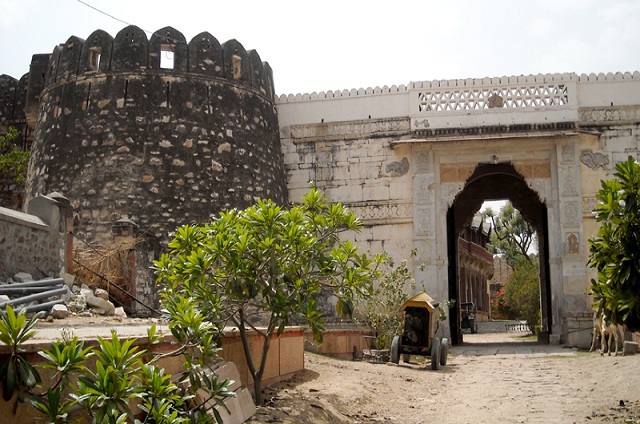